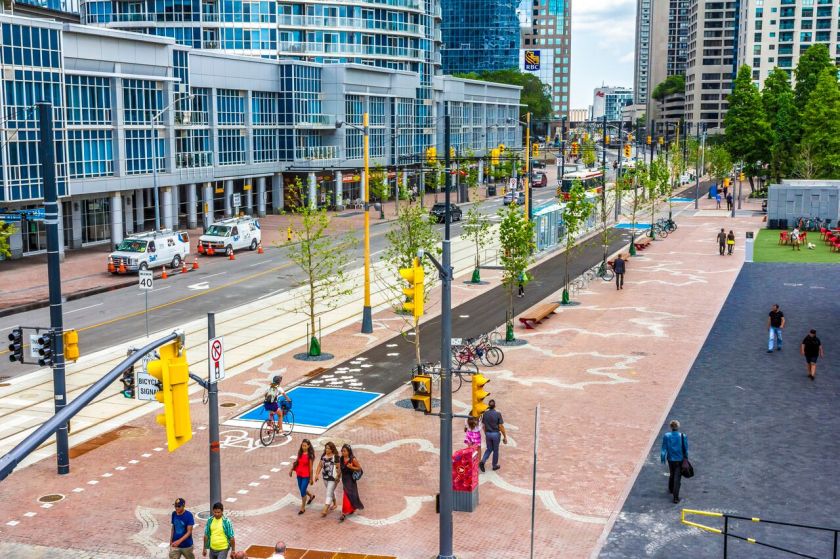 There has been considerable debate in the papers and on-line recently about the success/failure of the new Queen’s Quay streetscape. It is generally loved by urbanists yet the average Joe finds it confusing and the police have now dubbed it the most dangerous street in the city.

I had a chance to walk it’s length last night and I’ll say this. It IS dangerous. But not how you would expect.

The biggest problem seems to be that there is little separation between pedestrians and cyclists. In some cases there are street furnishings like benches and street lights, but in many others there is little more than a paving band to announce to pedestrians that they are about to get clipped by Toronto’s wannabe Lance Armstrong.

The street was packed with pedestrians while cyclists, skate-boarders and skaters were zipping along in their lanes at very high speeds. The generally distracted and happy pedestrians often meandered into the bike lanes completely unaware that they were in danger. I saw several accidents averted by wits, citizenship and good luck.

There is a generally accepted principle that bicycle traffic should share the same passageway as cars. This is particularly true where the use of bicycles is promoted as a means of commuting. The problem here is that the bicycle traffic shares the passageway with pedestrians. So I think it is both a grade separation and a location issue.